Even though I take great care to appreciate games purely on their own merits, I can’t say I’m totally immune to the cunning of nostalgia. There are some games I adore stronger than others due to factors entirely unrelated to quality. And I think everyone’s got a nostalgic game or two of his or her own, if we’re being totally honest with ourselves.

That game—or rather, franchise—for me is Marvel: Ultimate Alliance. While I almost never play games more than once, I’ve replayed the first MUA on PlayStation 2 twice more since I first completed it at around age six, as well as pouring over the “Special Edition” bonus DVD content. The second game, though, I had played just once with my cousin years back on his PS2. Only problem was…I had little recollection of the experience.

So imagine my immense surprise and satisfaction when, after endless searching, I found a PS2 copy of 2009’s Marvel: Ultimate Alliance 2 at my local Game X Change. It should be no question that I bought the darned thing immediately.

Some of you may wonder why I searched specifically for the PlayStation 2 release—a version that was, at the time of release, three years last-gen. This is a perfectly valid question that can be explained as…well, simple nostalgia. The PS2 is where I had lived and breathed the first game, and quite frankly, I wanted the second to match the entry already in my collection.

My platform of choice, however, ultimately ended up a somewhat shaky one. Whereas I was concerned about separating two series entries on a shelf, I should have been concerned about whether or not my new game was playable. Today, for the two or three other individuals on this planet who actually care, I’d like to share some words of warning. Just in case.

The very first thing you’ll notice when booting up MUA2 is, naturally, the title screen. Funnily enough, this is already where things start to go wonky. The grainy, low-quality JPEGs populating the PS2 version’s title screen stand in stark contrast to the beautifully rendered and Civil War comic cover-inspired title screen of the PS3/360 version. The graininess can obviously be attributed in large to the downgrade from HD to SD, but that doesn’t explain the “artistic liberties” taken with the PS2 title screen. 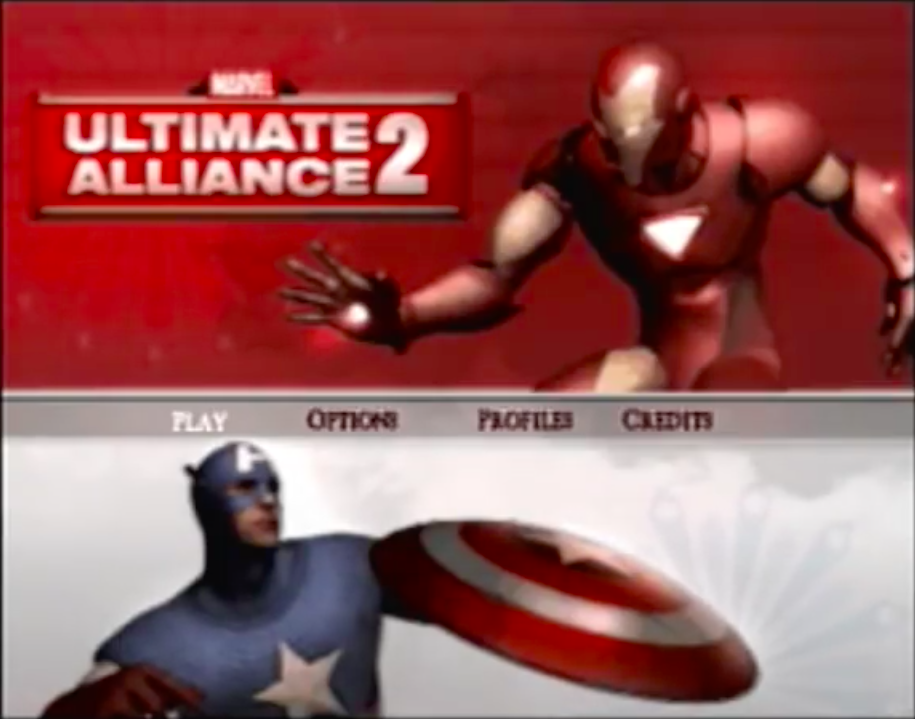 You’ll also immediately notice a problem that was just as apparent in the PS2 version of the first MUA: excruciatingly compressed audio. The MUA2 title screen music is one of my favorite video game compositions ever, but here on the good ol’ PS2, it’s definitely seen better days. Another interesting quirk is that MUA2 PS2 reuses the menu item selection sound effects from the first game, whereas MUA2 PS3/360 does not. Is that a problem? No, not at all; I actually enjoy the SFX. It’s just curious.

At risk of belaboring the point, I’d like to briefly mention that, even when playing the first MUA as a young boy, I always thought the audio fidelity was strikingly poor compared to other PS2 titles, even if I lacked the words to articulate it. Now, I’m definitely no audiophile, so maybe all PS2 games sound that bad, but something tells me there were some storage constraints in bringing current-gen to last-gen that resulted in muffled music.

After starting a new game, you’ll watch the opening cutscene—which has been compressed to heck and back to the point where the colors are way off. Also, while most shots are identical between the current- and last-gen versions, there were some shots that were pretty different, leading me to believe that the cutscenes may actually have been redone in lower quality for the PS2 release. Like, somebody please tell me why this one Spidey shot is flipped. 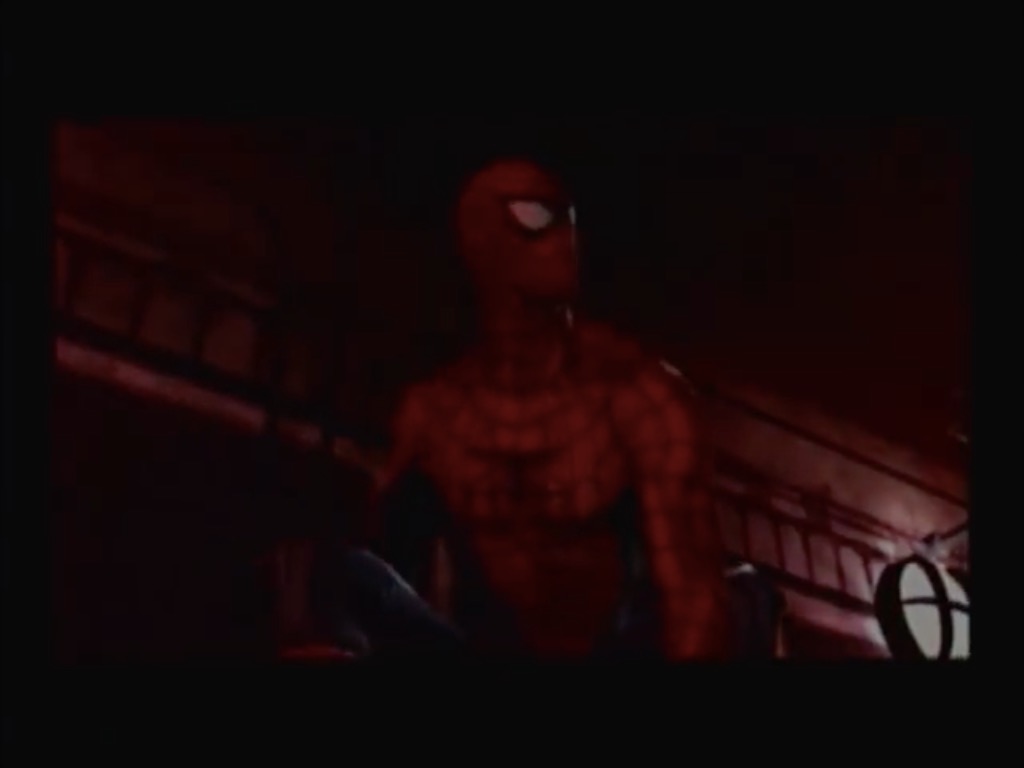 Considering there are other, even more substantial differences throughout, I have a strong feeling my hypothesis is correct. (I would go through them with you, but honest to gosh, who would want to read that?)

Following a lengthy loading screen, you’ll be dropped right into the heat of the action—in an environment that scarcely resembles that of its PS3/360 counterpart. Watching gameplay footage of the fancier release feels like watching a completely different game, because for all intents and purpose, it may as well be. You’ll notice very early on—what with the blocky character models, muddy textures, dipping framerate, and painful sound design—that Marvel: Ultimate Alliance 2 for the PlayStation 2 is not even close to the ideal means of playing Marvel: Ultimate Alliance 2.

From my understanding, there’s also a ton of cut content, both narrative and interactive, but that’s not something I can personally confirm.

I say all this not to bash one of my favorite games nor the talented developers behind it—because, goodness knows, they were only working with what they had—but instead to add a word of warning to the collective consciousness. I had no idea going in that MUA2 on PS2 would be so jarringly rough, so I was disappointed. I wouldn’t wish that negative feeling on anyone else.

Nothing about the PS2 version of the first MUA, at least to me, felt woefully out of line with what PS3/360 owners had received, even when revisiting the game years later. So in that regard, I didn’t feel it was necessarily wrong for me to expect a similar level of quality from the last-gen port of the sequel. As uncommon as it may seem, there may very well people like me out there—gamers who want to buy the PS2 version of MUA2 because they played the first game on PS2. Let me be the guy who steers you away from that misguided decision so you to get to play the better version. Call this an intervention.

With all that being said, do I regret playing Marvel: Ultimate Alliance 2 on PlayStation 2? Definitely not. Even though the port job was—let’s be real—pretty horrendous, I loved having that unique experience of playing the lesser game just for kicks. I love how MUA and MUA2, consistent in platform, look side by side on my shelf. And above all, I love the closure of finally beating a game that routinely graced my Christmas list for at least four years before I finally bought it myself.

AND I'LL LOVE YOU FOREVER

G.A.M.E.: How One Murray State Club Has Adapted to COVID-19

Check Out the Indie Arcade Wave Podcast on YouTube